He is a big drum fan. But Gábor Dörnyei is an excellent live and session drummer himself. We met at the NAMM Show, where Gábor proudly presented his Tycoon Percussion Drum Pack as well as his Vic Firth X5A Custom Drum Stick.

If you cross Gábor Dörnyei’s path, you will probably meet a very busy, energized and friendly person. He’s in the music business with all of his heart. And he has been so since his first encounter with music at the age of twelve. Hailing from a family full of academics with not much interest in music, Gábor had to fight for his dream from the very beginning. But his strong will paired well with his passion for music. Ever since being awarded Drummer Of The Year in his home country Hungary, his dedication paid off and continues to do so. In 2015 for example, Gábor performed with his tHUNder Duo at the London Drum Show. London has also been Gábor’s residence of choice for the last ten years. 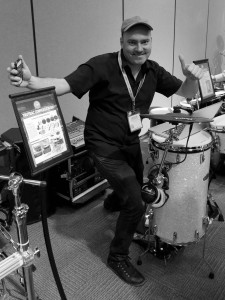 Gábor Dörnyei the player and educator

In 2011 the tHUNder Duo DVD was released. It features drumming’s global ambassador Dom Famularo and received rave reviews. The purchase is possible directly from the tHUNder Duo’s website. Lots of playing all over the world keeps the man on his toes. But because Gábor is also an excellent teacher, he joined the faculty at the Institute of Contemporary Music Performance (ICMP) in London. Moreover he has been invited to do masterclasses at the University of Southern California (USC) in Los Angeles, the DrumChannel in Oxnard California and also to Drumeo in Vancouver in the beginning of this year.

If you like to watch Gábor’s lesson about percussive drumming and independence on drumeo, just click on the link and you’ll fly over to YouTube right away. Hint: If you leave a comment about your favorite part of the lesson, you might even win a 17″ Crash Cymbal out of the new Zildjian S-Series.

Stay on or by(e) and visit Gábor here …
Yours Cat

Copyright 2021 by CAT with HATs
Click here to opt-out Google Analytics.
We use cookies to ensure that we give you the best experience on our website. If you continue to use this site I will assume that you are happy with it.Ok