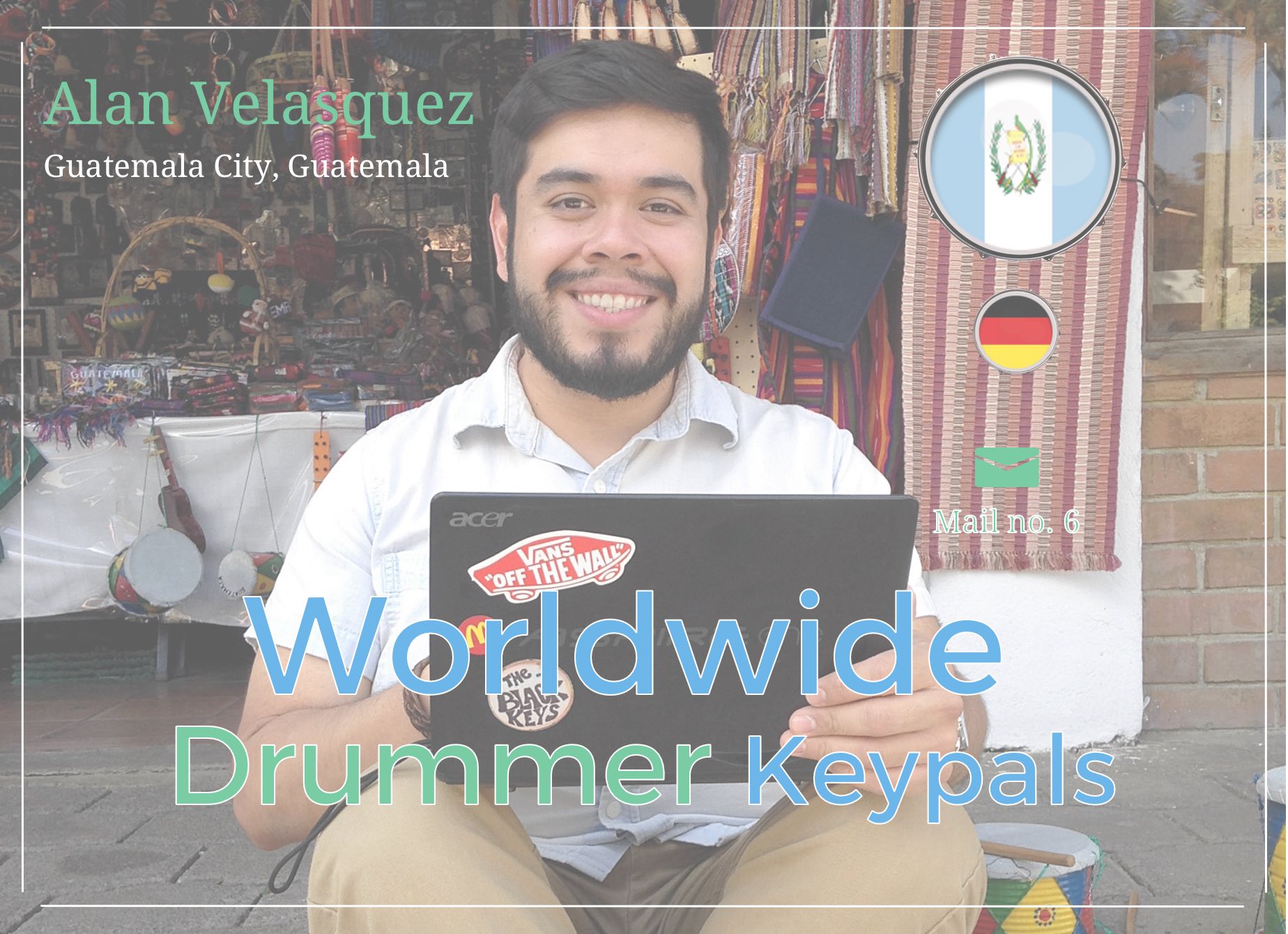 Finally I am able to publish a new post in this series. My latest keypal is from Guatemala: Alan Velasquez. We met online, where Alan runs a facebook site in Spanish to help people practice drums better.

you’ve gotta love the positive effects of social media today. It’s such a great way to find out more about what’s going on in the drummer world for example. I am glad we bumped into each other on Instagram.

So you are from Central America, from Guatemala. From where exactly? I’ve never been there. The closest I’ve traveled to are Florida, Cuba and Peru. If I drank coffee, I could have been in contact with your country indirectly, right? You must have lots of coffee over there – and bananas 🙂 But what else? Let me read a little on Wikipedia …

… Hey! Is it true that your national instrument is the marimba? Do you play it? Does everybody learn it at school? What’s the music in Guatemala like? It seems to be heavily influenced by African and European traditions, but also by the Maya culture. And of course modern beats are played by pop bands. But what do people mainly listen to? Do many people play an instrument? Is there a lot of dancing?

How about the clave, is it also present in the folkloric music of Guatemala? What percussion instruments are mostly played? What part does the modern drum kit play? Is there a drum scene in your country at all? I could imagine that playing an instrument in a rather poor country like Guatemala is a privilege. Is that true, or is necessity the mother of invention?

As I found out online, you’ve got a Facebook page called „Practice pad & Drumming“. On there you post photos and videos related to drumming. You even demonstrate some lessons yourself. Very cool. Since when have you been doing that? Are you a team or is it only you? How did you come up with the idea and why?

And what about yourself? Are you a professional drummer and also a drum teacher? Or is it just a great hobby of yours?

So many questions already. Let me give you a chance to answer them before my curiosity spits out even more questions.

I’m looking forward to hearing back from you. Muchas gracias.

And the reply from Guatemala ...

I agree with you, social media can be so helpful to connect with others and it’s fascinating when you find people from around the world that share the same passion, such as music! Your channel in YouTube caught my attention with such great interviews and the clip in Instagram of the marimba stone from Vietnam touched my heart.

I was born and raised in Guatemala City, I grew up in a humble neighborhood close to the airport. Yeah, there’s a lot of good coffee, probably one of the best in the world. I don’t want to sound so proud but it’s true. Guatemala exports coffee and bananas as you said, good ones too.

How can I start? As I am typing these lines, I sit on a bench at the market. There are several stores around where you can purchase typical items for home or things like souvenirs. You can find beautiful colors, blankets, bracelets, necklace and so much more. I thought if I go there, you’ll get a nice picture of a typical Guatemalan background. …

Yes, originally the marimba came from Asia and Africa, Africans brought the concept of putting the little wood boards together, then the very first Guatemalan players started to build them up with a particular wood called palo de hormigo (“ant tree”) which is very melodic and it grows specifically in these areas. Also the mallets are made of natural rubber and from a tree called Güisisil. Guatemalans made the marimba more melodic and harmonic, it has been changing with time and creating a very own and particular sound.

I don’t play marimba, I can do a couple things but I’m not not a player definitely. Haha. Yes, there’s some schools where kids can learn in music class, I remember seeing friends learning but I was busy playing drums. I regret a little bit ’cause I would love to know how to play the marimba. If you want to play marimba professionally, you can go to the conservatory and then play with the orchestra; it sounds beautiful and breathtaking!

Older people listen a lot to the marimba, there are bands that play some sort of mix of Jazz, swing, Latin and sometimes cumbia – very interesting and tasty! Those bands make their records with modern instruments: such as modern drum kits and bass guitar. Young people listen to pop, rock and there’s a few that are into jazz, funk, indie, folk; I include myself in there.

Yes, people love to dance here; older people listen to marimba at lunch time and then after a break they go to dance, younger people go to discotheques, parties or raves. There’s a lot of really good well prepared musicians and great teachers, I know that some of them play in orchestras and others have studied in the U.S.

Since the marimba was named as National Patrimony and National Symbol, I would say that it is the most folkloric percussion instrument. There are wood drums like djembe, rain tubes, turtle shell, drums made of bamboo and rattles made from a fruit shell called morro; all of them are Mayan influences. I think the modern drum kit showed up in Guatemala back in the 1970’s or 80’s. Now it’s very popular and important, you can see it in churches, bands, schools and even in marimba orchestras.

There’s a very particular drum scene, mostly the music industry has been growing a lot. The music stores have been playing a very important role in this. We have seen drummers like Eric Moore, Simon Phillips (with Toto), Virgil Donati, Horacio el Negro Hernandez, Dave Weckl, Dom Famularo and so many more. Such a great experience though – I’m still waiting to see Benny Grebb one day. That’s more likely an international drum scene.

But you are right, the real drum scene in Guatemala shows that it is a privilege to learn, study and even buy your instrument. I would say only the 25% can afford lessons, music schools and get professional gear. There’s a community of Guatemalan drummers that just started a few years ago, I feel that today it’s getting stronger and growing, specially since the social media has been expanded for everything.

Practice pad & Drumming started about a year ago, I don’t really remember, I have to go back and scroll to make sure haha! I started it as a “fan page” with a friend, but most of the time I’m the one who’s in charge, that’s because he’s in the Record market also (vinyls). I came up with the idea: I wanted to create a site where beginner players or whoever is interested in drums could learn for free and have a chance to get the drum theories, technique, rudiments, grip, stick control, etcetera – in Spanish!

I named it like that because I think that a practice pad is a very important tool just as drum kit. I feel like you can practice more privately with it. So I came with something like “get a pad and practice for drumming”. The videos you saw are a series of the 40 basic rudiments. Hopefully I will be able to complete them, it’s a commitment. I also wanted to take advantage of the social media nowadays, back in my teen days it was really hard to get access to drumming resources, such as videos, books or drum tips. Now it’s so easy and I think there’s no reason to keep it all to ourselves.

I believe in self-education but it requires discipline and dedication. I did go to a drum school for a couple of years, then I decided to take drums very seriously and paid for private lessons. And I started to study on my own and it has been great! I do consider myself a professional drummer, I’ve been drumming around with bands, did small tours in Central America and Mexico, a couple of times in the U.S., a couple of concerts with orchestra and a lot of recording sessions for several people in Guatemala.

I consider myself a student, I can teach and I love to. In the pictures above with the drums and posters behind is the place where I practice and teach. I teach young drummers and introduce them into music. It’s great because I see when their progress on drums shows up every day – it’s hard to make them practice though. Haha.

However, I have so much to learn myself. I think musicians never stop learning. Music is unlimited an infinite. Sadly I can’t dedicate full-time to drums and music, that’s the bittersweet part of life, when you love something and have a passion for something but you have to do something else to pay bills. Hopefully I’ll be able to do a lot more in the future and involve drums and music in my life, help and share with the Guatemalan community and maybe other countries, if I’m allowed to. So, I wouldn’t call it a hobby – I’ll call it the other half of my life.

All the best and love from Guatemala
Alan Velasquez