Brendan Buckley is the drumming link to all of these and more: Julio Iglesias, Shakira, Shelby Lynne, Miley Cyrus and Tegan and Sara. For 20 years he tours professionally and loves it. Why he remains successful becomes clear while meeting with him before a show.

The stage of the Muffathalle in Munich is covered in fog. Where is the drum set, where’s the drummer? The kit is all white and drummer Brendan Buckley wears white from top to bottom as well. His two fellow musicians do, too. But because he gets far too little spotlight and he’s not moving much while playing, Brendan is not that easy to spot for the eyes. The ears are a different story.

Brendan Buckley is on tour with the Canadian sisters Tegan and Sara – from April 2016 until September 2017. That’s a long stretch. Yet the 42-year-old drummer is used to jobs like that and loves working. What exactly he likes about steering music ships, he reveals in the video. For the last 20 years he’s been touring with various artists from many different genres: Latin, Brazilian, Rock, Pop, Hip Hop, Country and Singer/Songwriter.

Sounds That Fit The Purposes

Even though Brendan always brings the same professional attitude to a gig, a rehearsal or an interview his equipment changes according to what’s up on stage. Are you familiar with Tegan and Sara? Their new album Love You To Death is even more on the electronic side than their earlier ones. Nonetheless there’s a live drummer on stage – besides four people with a keyboard in front of them.

Consequently Brendan adapted his set-up to his surroundings: he built a hybrid kit. As he told me, the two artists, their musical director and himself were going for a sound that blends well with electronics. When shifting back and forth between the acoustic set and the electronic pads the change shouldn’t be drastic. Therefore the drums sound very controlled and punchy and the dark, thin cymbals respond quickly and don’t bleed into the singers’ mikes.

Later at the show, it took me a while to get used to this specific sound. I found it odd to hear lots of electronic beats, produced by a drummer behind an acoustic set. However, it definitely made a lot of sense. Brendan was actually so kind to show me his workstation in detail. We did a rig rundown. Europe’s biggest and fastest shipping music store Thomann Music sponsored the very insightful video.

Besides the equipment I was interested in Brendan’s musical journey. Straight out of college he went on big tours with Julio Iglesias and Shakira back in 1997. And although he did those huge gigs, Brendan grew even more and became more professional while working. So we also talked about that. And we certainly did the obligatory short profile, which has some interesting facts about the active drummer, such as what keeps him grounded and inspired and how he started out believing he could be the master of everything, but now is good at budgeting his limited time.

In addition to that I wanted to know, if playing other instruments besides the drums, made Brendan a better musician. After all he plays a bit of piano, trumpet, guitar and bass as well. It also came to my ears that Brendan gets ready for shows by meditating. Thus I popped a question about that. Well, the video above doesn’t cover the just mentioned subjects, but of course I will supply the links for you in time. Actually I’ll make the following three pictures clickable ASAP.

Get in touch with Brendan Buckley

Media and artists Brendan Buckley mentions in the video

Recordings with Brendan Buckley on 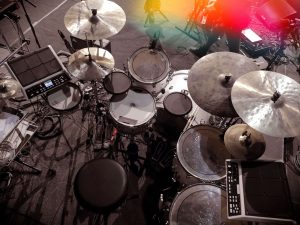