Beware of a gentle man with a liking for the dark sides of music named Randy Black. He is a very precise heavy hitter, who could beat you in hockey any time. Also watch out when he grabs his signature sticks to demonstrate one of his favorite rudiment.

Knocking on a metal drummer’s door

What would you expect to see and experience when you knock on the door of a creative metal drummer? Last February I had an appointment with Randy Black in his home in Berlin-Neukölln. Everything went well and was fine until I tried to get back home. That’s another story, but I won’t forget about. And I am so glad I didn’t know that story before we started filming.

Even though I lived in Berlin for more than ten years, Randy and I met in Los Angeles for the first time. To be precise we met at a Sabian event at the NAMM Show this year. Chad Smith played his heart out, Dom Famularo knew everybody of course and I talked to Randy Black about why he swapped Canada for Germany as a home base.

In contrast to many other people who bid goodbye with a “let’s stay in touch”, Randy really did. And that’s why during my last visit in Berlin I got to meet him again. In spite of not being into metal music at all, I was all ears about his drum talk, his stories from the road and elsewhere. Time went by quickly in his cozy home with creative decoration and a hot cup of tea.

Randy is known for his creative approach when it comes to playing drums in metal bands. He describes himself as an energetic, flashy and powerful drummer. Depending on the job he plays differently fast and hard, but always very precise. Some of the bands he played with are Annihilator, Bif Naked, Primal Fear, Dusk Machine and most recently Wasp and Striker. Enough work experience to pulish an educational double DVD of his own called The Black Book.

Guess which drummer is Randy Black’s biggest inspiration!? The answer might surprise you as much as the answer to which piece of music Randy purchased last. A hint: same as Thomas Lang. But just watch the video and find out. And while you do, also learn to play inverted double strokes in triplet form. Randy takes his time to explain elaborately how to practice this not so common rudiment. And he also shows you how to apply it on the drumset. Enjoy watching and practicing.

Done. I just had gained plenty of good material for a new video. What I didn’t know yet was that I also had been robbed in the subway on my way to Neukölln. Oh well, it’s a give and take and I still don’t understand the concept of taking without asking. I really prefer the concept of giving without wanting anything in return all the time. So thank you very much Randy, also for running up and down the stairs in search of my wallet. Speaking of, I got it back at the lost-and-found-office the next day. Empty wallet against a full memory card.

Get in touch with Randy Black 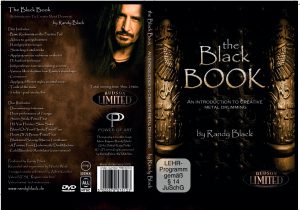 Recordings Randy mentions in the video

Some Recordings with Randy on 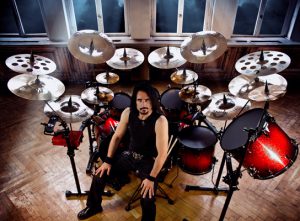